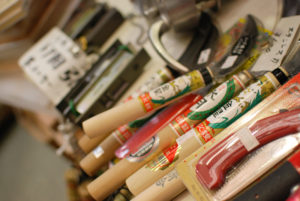 When you go down a bit south from the northern part of the town shopping area, you will come across a shop where tools and kitchen utensils are lined up, right next to the south of “Funa-shin”, where river fish trail along. This is the “Takeichi Cutlery Store”. It was originally a hardware store which was ran in Nayamachi since the Meiji era, but specialized in knives in 1938 and started branching out. Since then, they have been selling cutting tools such as kitchen knives, scissors, sharpened blades and even replacing fitted keys. 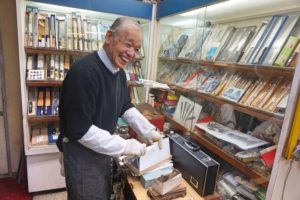 If you sell high quality goods, customers will return. That is Trust.

There are only a number of cutlery shops available in Kyoto to count, and in this age where it’s easy to buy cheap, made-in-China knives that people easily replace with new ones once they become useless. Despite this, shop owner Mr. Isao Ujimono shares the culture and history of their good quality cutlery which has been passed down from the previous generation and he has been using for 80 years now.

“Knives that can’t cut won’t sell. If you buy cheap stuff, it’ll go bad quickly after all. My father used to say that we shouldn’t sell something that’s impossible to sell. If you sell good quality stuff, people will come back. That is what trust is.”

According to Mr. Ujimono, one feature of a good knife is that the material should have a certain “thickness”. As the steel is struck, dust is pushed out which makes the material of the iron better, so the best way to distinguish a good knife is when the shade of the steel and metal is clear. There is also ingenuity involved in creating the handle of the cutlery, as it is said that strong cow horn is used to create a good quality handle. Knowing about good knives and understanding the difference between their usability and how they can be used for a long time, lets the user to form an attachment to these tools.
“Where did you hear about it? Is what I usually ask foreigners when they visit. It seems that even foreigners would like to know more about our cutlery,” says Mr. Ujimono. 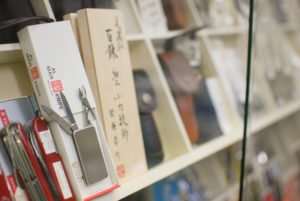 From parent to child, tools that are passed down for many generations

Although Mr. Ujimono is also familiar with the shop goods that are produced locally in both the Miki district of Hyogo prefecture and Seki district of Gifu prefecture, he is hoping that every single one of them will be used for a long time. Tools such as the bonito box used for shaving dried bonito (a Japanese preserved food; dried and preserved bonito meat) are normally handed down from generation to generation, not just used in one person’s lifetime. As such, even an “Itamae-san” (a professional/high end chef of Japanese cuisine) goes back to the shop of Mr. Ujimono, who in turn undertakes the maintenance of the cutlery. 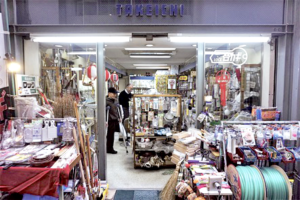